Our latest update is that we left Wrangell on Sunday August 10, 2015 to make our way home South.  The day started off nice and decided that Clarence Strait was to much to get into Ketchikan for the night so we anchored in Meyers Chuck.  We left early the next morning stopped in Ketchikan for petro (fuel) and headed out towards Dixon Entrance.  Dixon was very calm but it would have been to long of a day to make it to Prince Rupert so we stopped half way in Fury Cove.  This cove was very narrow to get into but so beautiful when we got back there. No one there, we had it all to ourselves until evening and four other boats showed up. We wanted to head out early the next morning for the 7 hour ride to Prince Rupert hoping the seas were calm like yesterday.  Boy did we luck out there.  But I had phone messages as soon as we had service and my Mom was in the hospital in ICU with zero white blood count and blood pressure low.  Ron and I had to decide to head for home quickly.  We made it to Prince Rupert cleared customs and headed out. We finally anchored at 9:30 that night in the dark and only relying on your charts.  The anchor alarm went off at 3:00 in the morning and we could still not see anything but it appeared we were not close to shore or the rock on the chart. We had just done a 360 degree turn so we went back to sleep for a few more hours.  The next morning was foggy and heavy mist when we left at 5:30 a.m. ready for our next 100 kt. day. Feeling our way by chart and radar.  The sun shined finally in the afternoon and we decided to stop earlier and not to anchor in the dark.  We stopped at another little cove off Albert Island in the light.  Our next day was going to be long trying to get to Fury Cove.  The waters were calm and we got there by late afternoon and were able to sit on the bow of the boat to relax before our next day crossing Queen Charlotte Sound.

As soon as we had cell service we were checking on Mom. She had been moved to Swedish Hospital in Seattle waiting for test results.

We went to bed early and woke up to check the weather which was reporting 6 ft seas so we decided to wait a few hours and go for it if it did not change.  We knew we had a 7 hour crossing.   As soon as we started we had swells but they just continued to grow.  Predicted 6 ft swells was more like 10 ft swells.  Crossing in a beam sea and then finally a following sea which the boat handled much better.  We would go up and the swells would come by and we would go down. I told Ron we weren’t suppose to be doing this again but we did not have time to wait out weather.  Barometer was falling.  Luckily this time we made sure everything was tied down the night before which helped tremendously with no noise of things banging around in the boat. Our boat handles the rough sea just fine, never a time that we thought we were in any danger. It’s just a very rough ride that seems to never end. We would rather have smooth sea, but there are times you just don’t have a choice. But we remind ourselves we have a boat that can handle it even if we don’t like it.

We got into Port McNeill yesterday and I called my sister.  My Mom was coming home that the tests showed something other then what they thought.  She is weak and going to need therapy and someone to come in daily for a while but at least she is home and on the mend.  Ron and I drew a deep breath Praise the Lord and decided to take a little more time getting home.  We stayed an extra day in Port McNeill did laundry, provisioned, cleaned and relaxed in the sun shine.  Yes we have a beautiful sunny day…….

Cabernet “at home on any sea” 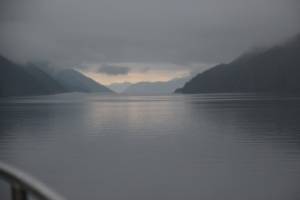 4 thoughts on “Port McNeill, BC”