Well we made it to Sitka.  Bob and Mary Jo Brummer arrived on Cabernet July 13 but not without some things like missing their flight in Seattle and MJ leaving her drivers license at home but they did make it.  Of course it was raining so after a nice dinner that night and provisioning the next morning we headed out in the rain…..Our first stop was Funter Bay where it rained all night.  The next morning we got up early to head out because of the weather and wanted to get out of the Lynn Canal.  Upon entering and going a couple of hours we decided to duck into Game Cove to wait out Chatham Strait.  We were not doing the big waves again.  Finally after a couple of hours we ventured out and it was calm so we crossed and headed to Tenakee Springs.  We arrived early evening so decided to go for a walk into town.  It was not raining when we started but that did not last long.  The next morning we went to the cafe to have their wonderful cinnamon rolls.  We finally headed out about 10:00 heading to Warm Springs.  The water was not bad but we did go up stream all the way so it took us longer then expected.  We arrived in Warm Springs but could not get a place on the float dock so we anchored in a small cove and after dinner decided to take the dinghy to the tubs of course it was raining but the hot tub felt great.  The next morning we wanted to get another early start to head towards Sergius Narrows and out of Chatham Strait before the wind and waves picked up.  It was not that bad just foggy and a quarter mile visibility..  We stayed the night in Baby Bear Cove and again it rained all night.  We put out crab pots and caught 7 crabs but could only keep the one male. All females.  The next morning was really beautiful we could at least see the mountains .and it was Bob’s birthday.  We needed to go through Sergius Narrows at slack tide but did not make it.  We were tossed around going through but of course Cabernet came through it with all she had at two knots against the current. It was running like a river and we were going upstream like salm   We got into Sitka and it was partly cloudy but no rain but that did not last long. Of course the first thing we did was cook up the crab for crab cocktails before going to dinner for Bob’s birthday. We went into town on Sunday in the pouring rain.  We had all our rain gear on but that was the only way we were going to get out and see town.  That night was another night of Mexican Train which we played several nights since all it did was rain.  Mary Jo was addicted and Ron thinks it is a stupid game lol……

Bob and Mary Jo flew back yesterday morning we had sunshine last night and cloudy today but that has not stopped us from riding our bikes into town. Ron finally got a hair cut. He was starting to look a little ragged and now lunch so we can get internet and I can post this blog.

We will be in Sitka until next week when our son and granddaughter fly in and then start heading South so that maybe we can get some sunshine.

Our trip with the Brummer’s was too short and we enjoyed their company greatly. 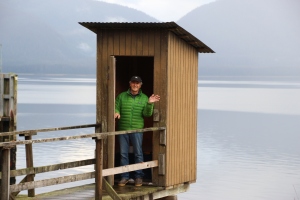 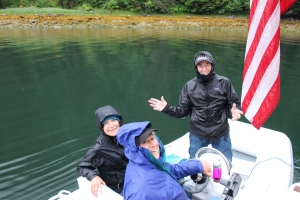 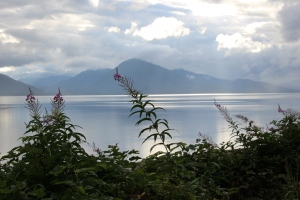 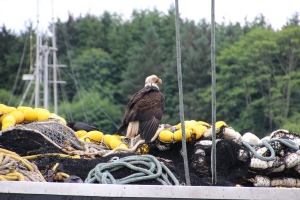 Well we are back after about 8 days traveling around SE Alaska with my parents who flew back home on the 6th.  Our first stop was Funter Cove on a public dock that was full of local folks. People are so friendly here to us.  The next morning we headed out Chatham Strait and saw a fishing fleet of about 17 boats fishing off Point Augusta so we decided to motor over and try our luck. We stayed off about a mile and put down a line.  We finally caught our fish 1 King and 2 Silvers, guess what we had for dinner that night.  Sushi for us and barbequed salmon for Mom.  We stayed in Tenakee Springs the next 2 nights which only has about 100 people.  Cute little town with one store, one bakery café, and their only transportation is by ATV. That is the main street an ATV path…a little walk for us from the marina to town.  Mom and Dad were getting there exercise making the trip to town to sight see.  When we left Tenakee Springs we decided to try halibut fishing just out in Chatham Strait in a cove we were told to try, but instead we got to see a pod of whales bubble feeding. Quite a sight!!  They kept surrounding the boat so we just sat and watched for quite a while as they went back and forth in the cove. They go down and herd a school of fish by blowing bubbles and chasing them to the surface where they all go in at one time and feed. Amazing to see all six of them stick their noses out of the water at the same time!!  Our next stop was Pt Moses Cove where we were on the hook. Here we saw for the first time an eagle swimming. He swooped down and caught a big fish, too big for him to continue to fly so instead he landed in the water, but didn’t let go of the fish. He used his big wings as paddles and paddled himself to shore where he pulled the fish up on a rock. Three other eagles showed up to see if they could get a part of the fish. We had put down the crab nets, but all we caught was two star fish and a couple of ugly bottom rock fish stuck in the netting.  After that we headed to Baranoff Warm Springs and were able to get on the public dock next to the waterfall.  Ron and I hiked up to the hot springs and lake. Beautiful alpine lake.  The hot springs were right next to the water fall, it was pretty spectacular.  Later that night after dinner Ron, I and Dad went up to the hot springs tubs that they had built overlooking the pier and waterfall. Hot sulfur water piped down from the springs, felt so good. The next day after checking the weather we were trying to decide if we should go because Chatham Strait was showing 4-6 ft. swells.  Ron’s better judgment was to stay another day, but dummy me overrode that and decided that we needed to go.  After poking our nose out in the strait and immediately getting water over the bow we should have turned back but not us we decided to go on.  6 hours later and over 16 foot waves and 50 mph winds we finally survived and arrived at Kuiu Island (Halleck Harbor).  This was not our destination but we didn’t care we were out of the rough water!! We were so exhausted.  At one point while I was at the helm Ron was up on the fly bridge tying things down that were coming loose.  We almost lost the tender.  After a while I was not sure if Ron was still up there or overboard, Mom and Dad could not move they had the animals next to them sitting in the salon.  Once we anchored the cleanup began.  We came through unscathed nothing broke…..and we did not get seasick although it was questionable at times. We have heard from locals that we caught the worst of it. Chatham Strait when the tide is going out and the southwest wind blowing in the opposite direction can produce the roughest sea.  Next time Ron says the swells are above 2 feet we are not going.   The next day we headed out and unbelievable the seas were calm, like glass.  Amazing how that works.  We ended up at Wood Spit Cove for the night where of course Dad and Ron were fishing off the boat.  Ron caught another silver but it was only 19 inches.  After checking the fishing guide I told them they had to throw it back it was not a keeper.  Of course I was told later that I read the wrong size and that it only had to be 16 inches.  Oh well we still have salmon in the freezer.  When we woke up that morning we were surrounded by rocks in a little hole with 26 feet of water under us but rocks all around, because of the minus 16 foot tides.  We are getting pretty good about anchoring with these tide swings.  The morning was beautiful so we put a line down and trolled so that Dad could hopefully catch those last several salmon and have them shipped home.  Guess he won’t have any salmon waiting for him.  We stayed again in Taku Harbor on the 4th along with locals from Juneau who get out of town for the 4th.  Later we saw a brown bear just meandering along the beach without a care in the world.  We were not close so did not get a good picture.

We are staying in Juneau until the 14th when we have some other friends flying in. This week we are cleaning the boat inside and out, laundry, provisioning, changing the oil and other maintenance things we need to do.  All a part of keeping up.

The only downside is that we have to ride our bikes into downtown Juneau in order to get internet service.

Until next time we have internet

Cabernet “a home on any seas” 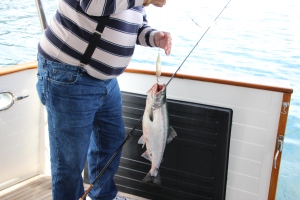 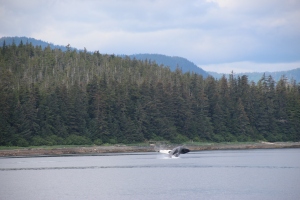