Ron and I left Washington last week hoping to beat the storm and get over the Siskiyou’s.  We stayed the night in Canyonville Oregon.  The roads were clear and thought about continuing onto California but decided against it since the pass maybe icy and the storm was not suppose to come in for another day.  Well we heard the rain in the middle of the night and it did not stop.  Woke up the next morning and checked the pass to see if we could get over.  No of course not it was snowing and going to continue for the next several days.  Now what do we do?  Stay in Oregon or try to get over to the coast.  We checked all the roads and found that it was not snowing on the hwy from Grants Pass to Crescent City so we decided to go.  It was raining and windy only 85 miles but 3 hours later we finally hit 101 and the coast.  Lots of switch backs and narrow roads  It was just like being on the boat in the 16 ft waves lol…..

Once we were on Hwy 101 we thought it would get  better but of course not the rain, wind and narrow roads were following us.  The only exciting thing was that we saw a sign about Elk.   We have never seen elk when we see these signs so we were not expecting to see them.  So as we are driving we see something ahead on the highway and started to slow.  It was ELK. 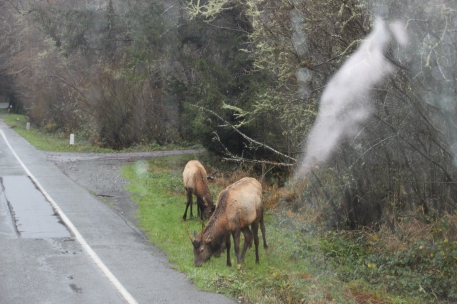 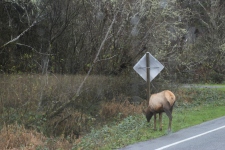 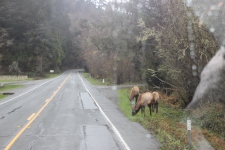 We made it to Clearlake for the night.  The next morning we headed to West Sacramento to an RV park to park the motorhome unhook the jeep and drive to Carson City to register the jeep.  We left at 12:00 p.m. again drove through wind, rain, snow, fog and anything else the weather could throw at us.  We made it to DMV registered the jeep, saw my brother and drove back to West Sacramento and were back by 8:00 p.m.  What a day…….

The next morning we headed to Visalia.  The sun was out and blue sky.  Ron sat outside with a cup of coffee enjoying he warmth on his face.  Had not been able to do that for a while.

We spent Christmas with our boys and grandkids which we have not been able to do for many years.  I cooked prime rib, garlic mashed potatoes, sautéed brussel sprout.  Yes believe it or not I can cook!!!!!

December 29, is Ron’s birthday kind of a big one.   I think we will take him out to dinner with the kids.

We are then heading to Bullhead City for New Year’s to spend with my sister and her other half Calvin.   It has been a very long time since doing that… 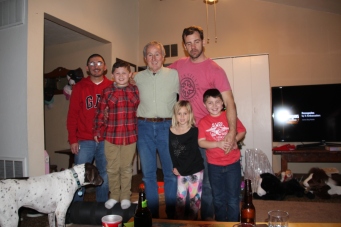